“We think by now that there can be no more untold stories from the 1930s and the Second World War. Then a book like this comes along and we are once again astonished by the capacity of some humans to do unspeakably cruel things, and of others to survive them. The simple, almost mundane tone of Antonia’s diary makes The Blue Suitcase all the more shocking. It’s hard to read, but harder to stop.”

“This is not an easy read but it is a compelling one. The simple narrative style of a diary is exactly right. The most appalling deprivations and gruesome events are related in a matter‑of‑fact way that makes them even more horrific.

This superb book is based on the life of Marianne Wheelaghan’s mother, and she has seamlessly supplemented the facts with impeccable research. I found this story uncomfortable to read but couldn’t put it down. It’s a story that will stay with you for ever. This is a must‑read book!”

The BESTSELLING The Blue Suitcase is the first in a series of three novels which tell the story of three generations of the one family and is inspired by real events. Book one (The Blue Suitcase) is based on Marianne Wheelaghan’s mother’s extraordinary early life and influenced by diary extracts and letters she found after her mother’s death. The novel starts in 1932 and tells the harrowing story of a young Christian German girl, Antonia, growing up in Nazi Germany, surviving against all odds. Book two, The Brown Paper Parcel, due out in 2016, is the story of what happens to Antonia (and her family) when she arrives in Scotland and is set in the 1950s. Book Three (due out in 2017) is the final part to the trilogy and set in Scotland in the 1970s.

Click here to buy your copy from Amazon or ….   Or call in at your local bookshop. If they don’t have a copy in stock, ask them to order it for you. Or go to Pilrig Press to get your copy post and packaging free.

In the US you can buy copies from the Regulator Bookstore and Purple Crow Books in Hillsborough, North Carolina

“…The reader is drawn into a world not often portrayed in fiction—that of the German civilian during Hitler’s reign. Antonia tells her story through her diary. At twelve she’s self‑absorbed and unaware of the political upheaval. By the end of her journey she’s an adult who has somehow survived the most harrowing of experiences and emerged a strong and resourceful woman.
Antonia shows how the German population gradually came to understand what a monster Hitler was but was helpless in the face of the Gestapo and SS. The devastation the British bombings caused to the civilian population is graphically depicted. Having survived the Nazis and the war, Antonia then has to face the barbarity of the Russian troops. When Silesia becomes part of Poland, Antonia and the remainder of her family are displaced.
This is not an easy read but it is a compelling one. The simple narrative style of a diary is exactly right. The most appalling deprivations and gruesome events are related in a matter‑of‑fact way that makes them even more horrific.
This superb book is based on the life of Marianne Wheelaghan’s mother, and she has seamlessly supplemented the facts with impeccable research. I found this story uncomfortable to read but couldn’t put it down. It’s a story that will stay with you for ever. This is a must‑read book for 2011.”    Fenella Miller, The Historical Novels Review*

Why I wrote The Blue Suitcase

My mother very sadly died a few years ago. Shortly after her death, I was helping my dad sort out her personal things when we discovered an old, small scuffed, blue suitcase full of her letters, diary extracts, photos, old postcards and faded documents, written in German, which was my mother’s first language. We were totally taken aback. You see, although my mother was from Germany, she never spoke German at home. And she never, ever, talked about her family or life before coming to Scotland after the end of WW2. In fact, you could say my mother’s early life was a mystery – we weren’t even sure where she was from in Germany.

As soon as Dad, who was Scottish, saw the documents he asked me to translate them – I’d studied German so it was not as mad as it sounds. But I was uncomfortable with the whole translating thing. My mum had been a very private person. My reading her stuff seemed a terrible intrusion of her privacy. But Dad wouldn’t give up. He missed mum terribly and believed knowing what was written in the letters and documents would bring her closer to him. I resisted doing what he asked – until I saw the photo below and then I change my mind. 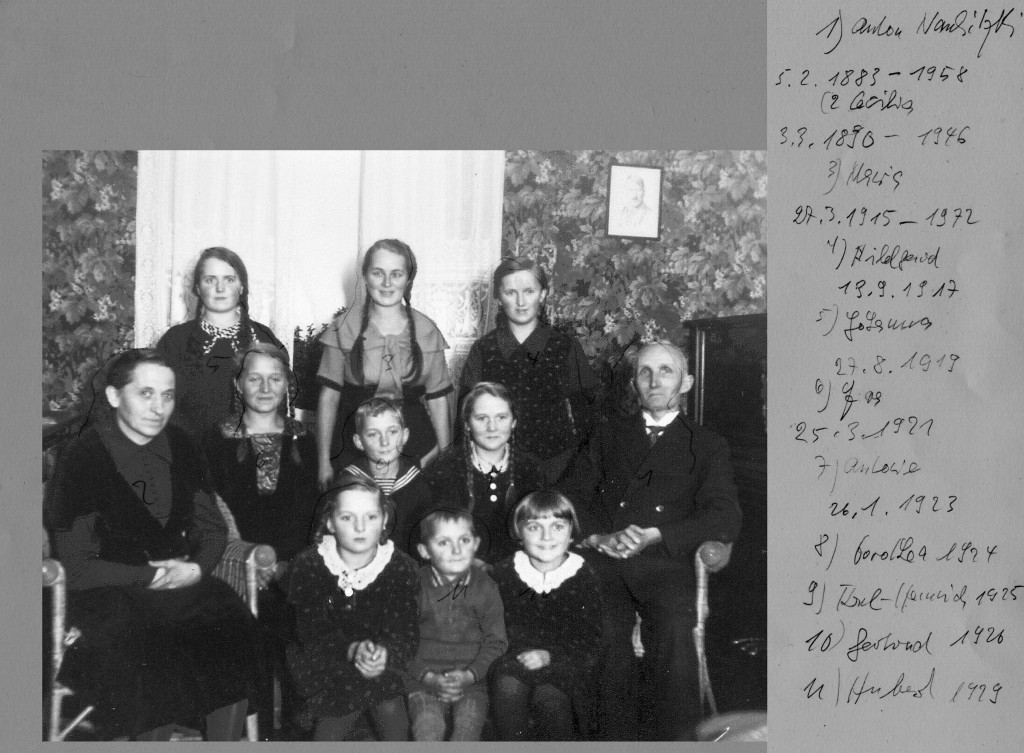 My mum is the young smiley girl at the front of the photo, next to the older man – I recognised her immediately. The other people in the photo are her family, my family!  It was not seeing them that made me change my mind, though (who knew I had so many aunts and uncles!).  It was, rather, seeing the picture of Hitler on the wall behind them – if you look carefully, you can see it above my grandfather’s head. I was totally shocked at the sight of it. My mum was a good, kind, thoughtful person and although I didn’t know her family, I couldn’t believe they were not also good people. BUT what were they doing with a picture of one of then most evil men in history on their living room wall? I started translating the documents in order to find out he answer to that question.

The more I translated, the more shocked I was by what I discovered, and all the more determined to find out more. I also went to the library to research history of Germany at this time (1932 – 1947), and in particular the region of Silesia where Mum lived.

When I finished I was both astounded and horrified by what I had read about my mother’s family and felt compelled to share my findings with others.

At first I thought I would write a biography, but I felt uncomfortable doing that: firstly, some documents are so faint they are illegible, and some appear to be missing. Secondly, I struggled to write about my mm. It was simply too personal. Then I had an epiphany: I would create a fictional family, inspired by Mum’s true family write about them. Much of what happened to my fictional family happened to my real family, but some stuff didn’t, although it could have – certainly, everything that happened in the novel is based on true historic fact: if didn’t happen to my family, it happened to someone else’s family. And that’s how The Blue Suitcase came to be: it’s the undertold story of life for an ordinary Christian German girl growing up in Nazi Germany and surviving against all odds.

Why did I feel so compelled to write this story? I wanted to right a wrong: when I was young there was an unspoken belief that all Germans were “baddies” and Hitler’s “willing executioners”. And I am ashamed to say, I remember feeling embarrassed at times because my mother was German. Now I know that not only were many ordinary Germans also victims of Hitler’s terrible regime, but that my mother was a refugee, and like millions of other Silesian German refugees, forcibly expelled from her home at the end of WW2. It seemed to me wholly unjust that the suffering of my mother and my aunt, and so many other aunts and uncles and mothers and fathers like them (on all sides), should go unacknowledged.

6 Responses to The Blue Suitcase