Suspense Interview with My Bookish Ways in the US

Please welcome Scottish suspense author Marianne Wheelaghan to the blog! Her newest novel, Food of Ghosts, just came out last year, and Marianne was kind enough to answer a few questions about the novel, why she writes, and more! 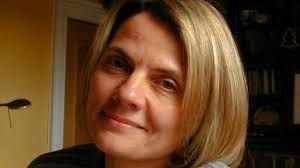 Will you tell us a bit about yourself and your background? Did you always want to be a writer?
When I was in primary school I had to write a story about my favourite place. I wrote about my bed. I said it was my favourite place because from under my bedcovers I could imagine I was anywhere in the world and I could be anyone. I wrote about all the places I’d visited (from my bed) and all the different people I’d become. The story won a prize. It was the first time I’d got praise for anything. I was amazed: I’d found something I was good at and it didn’t get me into trouble – I was a rather naughty child at school, hem! I continued to be good at writing at school. It wasn’t, however, something I ever imagined you could do for a living.

I’d always wanted to travel, so, when I left school I ended up doing just that. I worked in various countries, doing various jobs: I was, to name but a few, a cashier in a pizza restaurant, a croupier in a casino and a Brussels sprout picker on a farm, and I worked in Germany, Spain, Papua New Guinea and Kiribati. Most of the time, however, I used to teach English and Drama. I was very happy teaching. Then someone I knew drowned. It was an accident but I felt the accident was the indirect result of a kind of bullying. It set me thinking about why people behave the way do and how bullies could get away with murder, if you let them, and I got this idea for a novel which I couldn’t shake off, like a dog that bites into your leg and just won’t let go.

I started writing my “novel” but my writing was awful. I may have had some storytelling talent, perhaps, but I certainly didn’t have the skills to shape my idea into a novel. To cut a long story short, I went on a course and studied creative writing. Since then I have written two novels. My first novel is the The Blue Suitcase. It’s historic fiction based on letters and diaries I found after my mother’s death and tells the story of an ordinary Christian German girl (my mother was German) growing up in Nazi Germany. Food of Ghosts is my second novel, although my first crime novel. I also run the very successful online creative writing school www.writingclasses.co.uk. 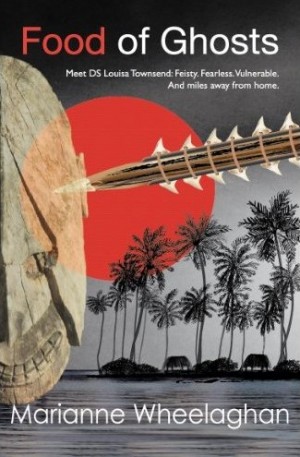 Will you tell us a bit about your newest book, Food of Ghosts, and Sergeant Louisa Townsend?
Food of Ghosts is set on a small coral atoll, called Tarawa, which is the capital of The Republic of Kiribati. Nothing much happens on Tarawa then a mutilated, naked body is found in a children’s nursery hut. Detective Sergeant Louisa Townsend from Edinburgh is on the island developing a Police Investigator’s programme (funded by the European Commission). As all the national detectives are in New Zealand at a conference and Louisa is asked to lead the investigation into the bizarre killing. Louisa jumps at the chance to be in charge. But nothing on Tarawa is what it seems. There are rumours the death was caused by a ghostly spirit and culture and family clashes complicate matters even further. Then a second body is found and a third death looks suspicious. Louisa has one week to find the killer. But with no forensics on Tarawa and no one telling the truth, it seems as if the killer may find Louisa first.

DS Louisa Townsend is as impetuous as she is ambitious, with an innate sense of justice at her core. Her determination to find the killer is matched only by her struggle to overcome an obsessive compulsive disorder, which threatens to consume her.

Why Tarawa and OCD? I think having a sense of belonging is a very important part of who we are and vital to our well being. It is something we in the developed countries are losing, to our detriment – we live in a world where everywhere seems to becoming like everywhere else i.e.: a big homogenized nowhere. Studies by the UN have shown a lack of a sense of belonging can lead to long term suffering and mental illness – it is no surprise then that 1 in 5 people in the Western world will battle mental illness and the other 4 in 5 will have a friend, relative, classmate or colleague who suffers from it.

While I was in Kiribati, like my favourite Scottish writer Robert Louis Stevenson before me – who stayed in Butaritari in 1890 – I admired and was fascinated by the I-Kiribati strong sense of belonging and how the people managed to maintain their traditions in the face of increasing development and “westernisation”. I often think it ironic that “developed” countries, with all our problems, offer advice (in the form of aid) to lesser developed countries such as Kiribati. Of course, Kiribati is not perfect and development has no doubt brought benefits to Kiribati, but it seems to me that there is a lot that we in developed countries could learn from the people of Kiribati and their way of life. And it is no coincidence that my protagonist in Food of Ghosts, DS Louisa Townsend, suffers from an Obsessive Compulsive Disorder – very much a western illness – and is funded by the EC, a Western Aid Doner. Maybe I’m trying to be too clever for my own good, but I like to think of Louisa’s OCD as a symbol for the consequence of “a lack of a sense of place and belonging” in developed countries. It is meant to be ironic that she is on Tarawa to offer “advice”.

I set Food of Ghosts in the year 2004 because the last ten years have seen the emergence of new and alarming challenges for Kiribati – not least the possibility of rising sea levels because of global warming and child poverty. Food of Ghosts is the first in a series of crime thrillers set on Kiribati and the Pacific, which will ultimately reveal how this little country survives, if it does! Why is this important? Because what is happening in Kiribati is potentially what is ahead of us all.

Tarawa is also perfect setting for a thriller – its remoteness, isolation and the potential for cultural misunderstandings create opportunities for tension.

What do you love most about writing mysteries?
Aristotle once said that we humans like to believe we have a core of goodness at our centre. I think this is true and which is why over one third of all fiction sold in the UK last year was crime fiction – readers like to identify with the good guy and what better goody than someone who solves murders and gets the bad guys locked up. I like writing mystery-cum thrillers for the same reason: I like seeing justice done, even if it is only on paper.

What are some of your biggest literary influences?
I love reading and like all sorts of writers but my biggest influences must be all the great crime writers from Agatha Christie to Lawrence Block to Val McDermid to Dashiell Hammett to Chandler to Henning Mankel and Andrea Camilleri to Sue Grafton and many more. 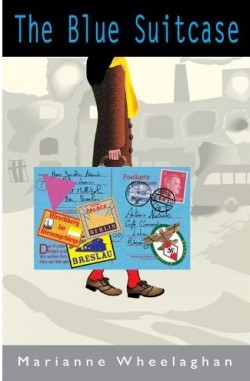 If you could experience one book again for the first time, which one would it be?
I think it would Franz Kafka’s Metamorphosis. Franz Kafka is such a clever writer he makes you believe an ordinary man, Gregor Samsa, has turned into a giant a cockroach even though you know it’s impossible. My second favourite short story of all time is a story by Mary Hood called How Far She Went. The tension created from what is not said is electric.

What book (s) are you reading now?
I’m in the middle of A Thief of Time, a crime mystery by Tony Hillerman. His detectives, Lieutenant Leaphorn and Officer Jim Chee, are Navaho Indians. Apart from being great crime stories, his novels are told with a sensitive and enthralling grasp of Navajo tradition and lore.

When you manage to carve out some free time, how do you like to spend it?
I like going for long walks either by the sea or in the countryside.

What’s next for you this year, and beyond?
I’m working on the next novel in the DS Louisa Townsend series, which will take place on Tarawa and in Fiji. There will be some familiar faces but DS Townsend will also have the Fijian culture and people to get used to – and another murder (or two) to solve, of course 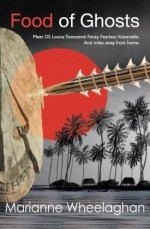 About FOOD OF GHOSTS:

Nothing ever happens on Tarawa, a coral atoll in the middle of the Pacific. Then a mutilated body is found in a children’s nursery hut. Detective Sergeant Louisa Townsend from Edinburgh is on the island, helping train local police officers in basic detecting skills. She is asked to find the killer and jumps at the chance to be in charge of her first murder investigation. She marvels at the simplicity of the task ahead – after all, how difficult can it be to find the murderer on a desert island the size of a postage stamp and with only one road? But nothing on Tarawa is what it seems. There is a rumour the victim’s eyes were eaten as part of a macabre, cannibalistic ritual and a second body is found and a third death looks suspicious. With no forensics on Tarawa and no one telling the truth, Louisa begins to worry she’s out of her depth – not to mention the voices in her head have started up again. DS Townsend is an engaging, new female detective from Edinburgh, who is as impetuous as she is ambitious, with an innate sense of justice at her core. Her determination to find the killer is matched only by her struggle to overcome an obsessive compulsive disorder, which threatens to consume her. To read Food of Ghosts is to be taken to Tarawa and be immersed in the crazy sights and sounds of the contradictory island and its people. Food of Ghosts is the first in a series of crime novels featuring DS Louisa Townsend.