What can a tenner get you on a Thursday night in Edinburgh? 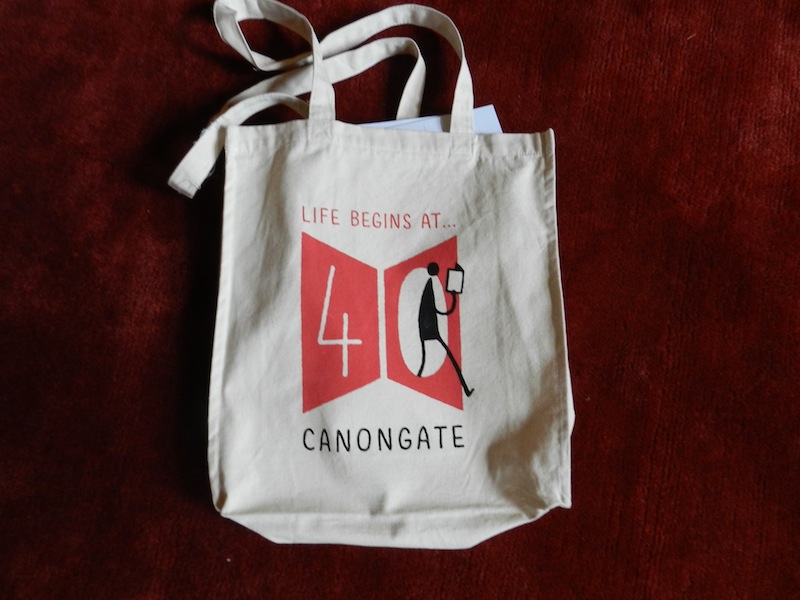 Yesterday, here in Edinburgh, a tenner got me into publisher Canongate’s 40th birthday bash called The Other Side, described as …

“A narrative mash-up event not to be missed … Canongate will bring together some of the best storytellers we know and take guests over to the dark side with twisted tales and music … and showcase original short films plus live art by graphic artists … Hosted by South Bank Associate Artist and official poet for the London Olympics Lemn Sissay.”

What was it like? There was a queue to get in but it didn’t take long to go down. We, that is my writing chum and me, 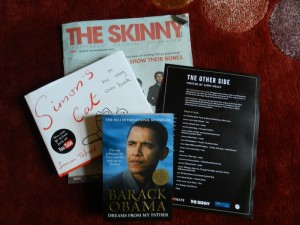 passed a grim reaper  (minus scythe), had our tickets verified and were then invited to go through a “portal”of  various layers of shiny, stretchy material – think the Samaritans advert with  Pink Floyd’s ‘Is there Anybody Out There?’). The  layers went from  dark to bright white until bingo, you’d reached “the other side” (and the inside of Edinburgh’s Jam House). Here we were offered shots of Tequila and a goodie bag – I love goody bags. I got Barack Obama’s book and Simon’s Cat. I’m going to give Mr Obama’s book to my Aunty Sue ;0).

The place was HEAVING.  Somehow we managed to score a table towards the front of  the stage area.  Yeh hey! All the  “well kent faces” appeared to be there, from Jamie Bing himself – for those of you who don’t know, Mr Bing is head of Canongate, a “deviant posh kid” (his own words, or more or less), who rescued Canongate from oblivion and made it what it is today, one of the most dynamic publishing houses in Britain – to Liz Lochhead,  Scots Makar – the National Poet for Scotland – in 2011, to Peggy Hughes, Programme Director of the Dundee Literary Festival, (yes, you are  well kent face, Peggy Hughes!).  And the mash-up?  It was good. Canongate did themselves proud. Definitely, but for me, four artists/performances stood out:

Hollie McNish: a brilliant performance poet. Go see this woman if you ever get the chance.

“An ambitious multimedia project pulled together by director Cora Bissett and lent direction by the dramaturgy of playwright David Greig, Whatever Gets You Through the Night is an anthology of theatrical and musical vignettes which strives to illustrate the character of Scotland after dark, of the convergence of hope, despond and a sense of being out of oneself that being up and awake while the world sleeps brings…”

James Rhodes: Wow! is all I can say about James Rhodes. He  is a classical pianist and former psychiatric patient  – whose debut album, Razor Blades, Little Pills and Big Pianos reached No 1 in the iTunes classical chart. Read more about this amazing man here:

Too Much Fun Club–  graphic artists, who did a lot of great drawing!

It was a very entertaining evening. Was it worth a tenner? Definitely 🙂

One: At the risk of sounding like a fuddy duddy, something seemed wrong with the sound system, sometimes I couldn’t hear the performers as clearly as I’d have liked, especially when the spoken word performers were accompanied by background music – of course, it was noisy, 400 + people, but still, that was a pity.

Two: you’ll see from the list of performers at the bottom of this page, very few are female. I found that really disappointing 🙁

Would the  lack of female artists in this narrative mash-up have bothered you? Do let know what you think!

Oops, finally, finally, as we were preparing to leave we discovered the below sign under all the clutter  on our table. Oops! To the VIPs whose table we stole, very sorry, hope you had as good a time as we did – even if you had to stand ;o) 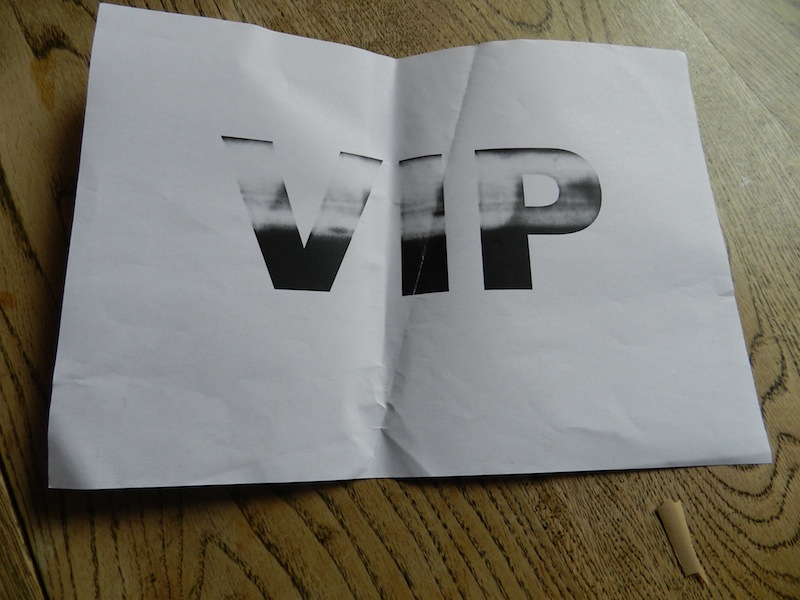 Films
And we’ll be screening short films including:
An exclusive preview of the trailer for Under the Skin, starring Scarlett Johannsen
Tilda Swinton’s reading of The Raw Shark Texts
Matt Haig’s Advice for Humans
Gil Scott Heron’s performance of The Other Side

This entry was posted in For everyone and tagged Aidan Moffat and RM Hubbert, Alasdair Gray, Canongate, Hollie McNish, James Rhodes, Jamie Bing, Jeremy Dyson, John Kielty, Lemn Sissay, Liz Lochhead, Matt Haig, Michel Faber, Narrative Mash Up, Peggy Hughes, Rick Redbeard, The Jam House, The Other Side, Too Much Fun Club, Whatever Gets You Through the Night. Bookmark the permalink.

2 Responses to What can a tenner get you on a Thursday night in Edinburgh?