Who is your favourite Queen of Crime? And Kendra Rose, my first guest blogger! Yeh hey! 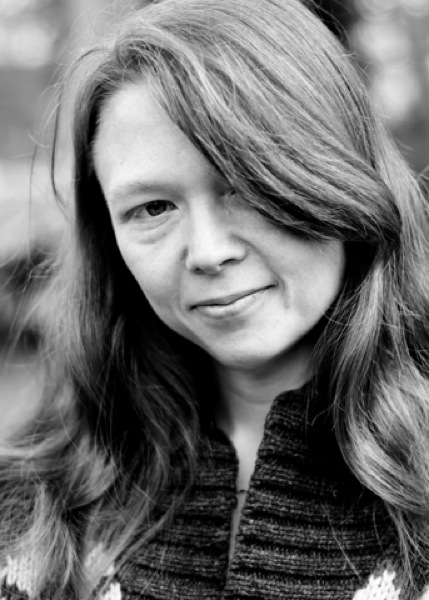 Please welcome my first guest blogger, Kendra Rose. Kendra lives in London with her husband and two cats. She has been writing on and off since she was a child and taken several creative writing courses, many of them at Writingclasses.co.uk. She is currently writing a novel set in historic Sweden which she hopes to complete by spring.

Kendra recently visited the   “Murder in the Library: An A-Z of Crime Fiction” exhibition at The British Library in London. She’s written about the visit here. And even if you’re not one of the one third of fiction readers who read crime fiction,  I think you’ll be fascinated at the way crime and detective fiction has changed over the years. Now here’s  Kendra about her visit to the library  ….

Murder in The Library

It was a good exhibition, worth seeing if you are in London. I’m not sure that it included everything but I thought it gave a good overview and starting off point. It would have been nice if it gave a bit more information on these writers and their works though, or perhaps encompassed more within its scope. It certainly gave me some new authors to check out whom I didn’t know before.

A was for Agatha Christie, whose first novel was written in two weeks (The Mysterious Affair at Styles). I don’t know how she did it in such a short time. 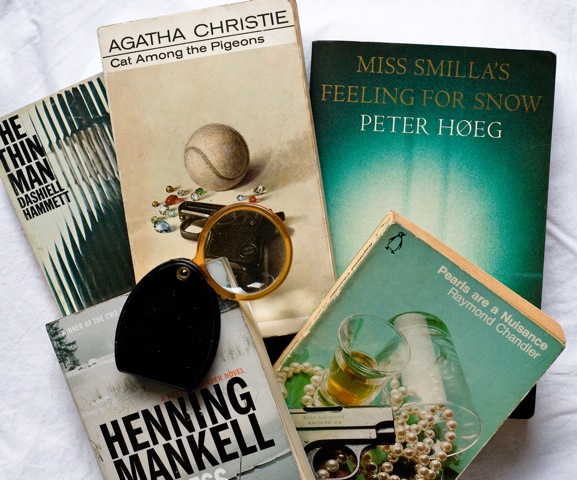 B was for ‘better known for’ and noted that people from many different walks of life have tried their hand at crime fiction successfully.

C was for clues. Dennis Wheatley wrote a series of mysteries in the 1930s (‘The Malinsay Massacre’ is one of them) which were presented as case files meaning they included letters, testimonies and actual pieces of evidence which the reader was meant to decipher to solve the mystery. A modern day example of this is the Georgian writer, Aka Morchiladze’s work ‘Santa Esperanza’ which is comprised of 36 booklets and a map contained in a traveller’s bag which the reader is meant to follow and decipher. I’d be interested to know if anyone here has read any of these works or anything similar. I’m not sure that they would be to my taste but it’s an interesting idea.

Related to C was J as in ‘jigsaws’. Apparently during the time between WW1 and WW2 it was very popular to play murder mystery puzzle games at parties (Cluedo anyone?). 28 volumes of these games were published but most of the originals are now lost.

D was for detective. James Lee Burke was featured for his 2007 novel ‘The Tin Roof Blowdown’ which takes place in the aftermath of Hurricane Katrina in New Orleans. It has received awards for the best fictional response to the disaster. Has anyone here read this? It’s on my ‘to read’ list.

E was for ecclesiastical mysteries such as Antonia Fraser’s ‘Death of a Nun’ which she wrote in 6 weeks when she was having difficulty writing her biography of Charles 2.

F was for Forensics. Noted here was Patricia Cornwell’s work Waking the Dead and her character Dr Kay Scarpetta. Apparently she is the only novelist to have won 5 awards in a single year.

G was for the Golden Age of crime fiction which took place between the 2 world wars (Ellery Queen, Ronald A Knox, Dorothy L Sayers, and EC Bentley).

H was for hard boiled detective fiction which came from America, such as that of Dashiell Hammett (The Maltese Falcon) and Raymond Chandler (The Big Sleep). I have to say that these are two of my favourite American crime writers.

I discussed who the first crime writer really was. They think it was Edgar Allan Poe with the publication of ‘The Murders in the Rue Morgue’ in 1841.

J was for jigsaws as discussed above, under C.

K was for kidnapping. Josephine Tey’s novel ‘ The Franchise Affair’ was based on an 18th century case where a woman and her daughter were accused of kidnapping a servant girl named Elizabeth Canning. The mother was nearly hung for it except that one of the judge’s was not satisfied with the outcome of the case and went about getting more information which eventually led to their release and the servant girl’s imprisonment (but not hanging).

L was for locked doors and the seeming impossibility of solving a murder which happened behind them (‘The Great Merlini’, ‘The Hollow Man’, and ‘Mystery of the Yellow Room’ by Gaston Leroux, also ‘The Murder in the Rue Morgue’).

M was for Mayhem such as that in the Midsomer Murders series by Caroline Graham.

N was for Nordic Noir. Henning Mankell and Stieg Larsson cite Per Wahlöö and Maj Sjöwall as their inspiration (I think I’ll check them out 😉 ).

O was for Oxford as it is the setting of many murder mysteries, famously including the Inspector Morse series by Colin Dexter.

P was for police procedurals which began as a genre around 1945 and came from America. A notable current example being the Inspector Montalbano series. Also Maigret and William Russell a little known writer from Edinburgh whose ‘Recollections of a Policeman’ were published under the name of ‘Waters’ and popularised the image of the private detective thus sparking off a new wave of crime fiction.

Q was for Queens of Crime. They list these as being: Agatha Christie, Margery Allingham, Dorothy L Sayers, Ngaio Marsh, and Josephine Tey. PD James begins her stories by choosing a setting. (Why is Marianne not listed?). 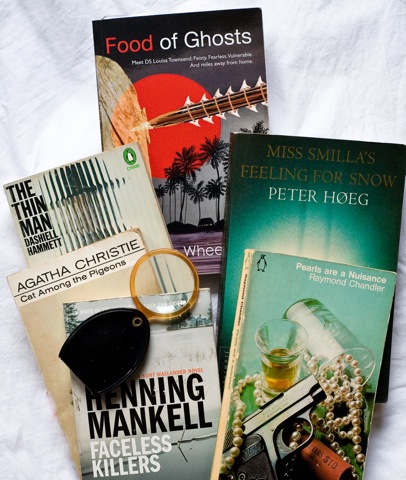 R was for railways and the murders that happen on them. Murder on the Orient Express is still Christie’s most popular book.

S was for Sherlock Holmes who has never been out of print and has made over 250 different appearances (his only serious literary contender is Dracula). They had one of Conan Doyle’s original notebooks on display and one of the things which struck me is how clean the pages were. I would have assumed that as he was writing by hand that he would have numerous scribbles and slashes but it was astonishingly and unnervingly clean. Perhaps it was his final draft?

T was for True Crime or crime fiction based on real events such as Lady Audley’s Secret or Francis King’s novel ‘Act of Darkness’ based on a real life murder of a young boy by his sister. King then transposed this plot onto a different family living in India.

U was for Unsuitable Job, i.e. unsuitable for a woman (!) and focussed on women detectives. Miss Gladden of ‘The Female Detective’ was the first in 1864, then Loveday Brooke in the 1890s. ‘The Female Detective is now back in print and available from the British Library. http://pressandpolicy.bl.uk/Press-Releases/The-first-ever-female-detective-in-British-fiction-will-appear-on-book-shelves-once-again-5cb.aspx A new breed of female detectives then sprung up in the 1970s, these were professionals and not amateur detectives

V was for villains such as Raffles and Ripley. In Patricia Highsmith’s novels there is no justice. I’ve not read her novels but I have to say that I like it when justice is done in a crime novel, the villain is punished and everything wraps up nicely, or at least somewhat so.

W was for Wilkie Collins whose 1868 ‘Moonstone’ is considered to be the first detective novel.

X was for xenophobic sentiment which allowed for the creation and popularisation of Dr Fu Manchu during the time of the Boxer Rebellion and the popular idea of a “yellow peril” around 1900.

Y was for young detectives such as Emil and the Detectives published in 1929 by German author Erich Kastner and the only work of his to escape Nazi censorship. Enid Blyton, Nancy Drew and The Hardy Boys also got a mention.

Z was for zodiac or ‘The Tokyo Zodiac Murders’ debut novel by Soji Shimada who is a musician and astrologer as well as a writer.

Do you agree with the list? Who is your  favourite Queen (or King) ) of Crime? Are they on the list? Should they be?

And if you are a writer and have an idea for a guest blog spot,  I’d love to hear from you. Get in touch with me at marianne@marianewheelaghan.co.uk

ps:  “Murder in the Library: An A-Z of Crime Fiction”is free and runs until the 12th May. The British Library is located at 96 Euston Road, London NW1 2DB and the nearest tube station is Kings Cross St Pancras.

This entry was posted in For everyone and tagged British Library, Kendra Rose, Murder in the Library, Queens of Crime. Bookmark the permalink.

12 Responses to Who is your favourite Queen of Crime? And Kendra Rose, my first guest blogger! Yeh hey!