Joyce Carol Oates is a ledge! For those of you not from Edinburgh, a “ledge” means  a legend. I saw Joyce Carol Oates yesterday at the  EIBF and make no mistake she is a legend. The first story I ever read by Joyce  was “Where Are You Going, Where Have You Been?” I loved everything about it: the place, the characters, the tension, the story, the style, everything. It was published in 1966 and since then Joyce has written absolutely masses, including 57 novels, 20 collections of short stories, various poems and essays. Also, as of 2008 Joyce Carol Oates is the Roger S. Berlind ’52 Professor in the Humanities with the Program in Creative Writing at Princeton University, where she has taught since 1978. She has been nominated for and received many literary prizes and is an incredibly clever person with strong political opinions. Her two lastest books are a memoir called A Widow’s Story  (written after she lost her husband after 47 years together), and a novel called Mud Woman. Mud Woman is the story about a very successful woman’s breakdown and her recovery from it, albeit scarred (it is also a very political novel). 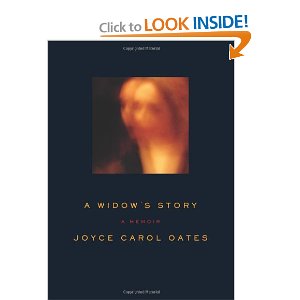 What to say about this legend? Well, first of, while I was sitting in the sun having my coffee, waiting to go into the book festival tent to see Joyce, she sat on the chair next to me and read the Financial Times and the Scotsman. I was tempted to ask her a quick five questions (hem!), but did not, there’s a time and a place for everything and this was neither. Before she left I did let her know how much I appreciated her writing and she very graciously thanked me. Now back to the event:

Joyce  read from Mud Woman and talked about the structure of the novel – she likened discussing the structure a novel to examining the working behind a clock face. 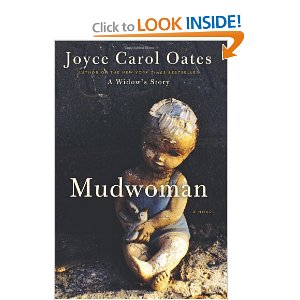 The title Mud Woman came to her in dream: she dreamt of a sorrowful woman, who looked as if she had mud on her face. The image was so emotionally charged that when she woke up she started writing about it immediately.  She then couldn’t stop thinking about the image and was compelled to write about it some more.  This is the first time she has used an idea/image from her unconscious for a novel.

Ideas for novels/stories can’t be forced. It’s like falling in love. You can’t make yourself fall in love with someone, you either do or you don’t. It happens or it doesn’t. It’s the same with story ideas. You can’t write without that emotional charge.

Joyce  referred to a discussion at The Edinburgh Writer’s Conference  (the theme being Style versus Content) and said style in literary fiction is everything.

Joyce usually has the first and the last line of her novel when she begins. She then ‘constructs’ the bit in the middle. In Mud Woman she moves back and forward in time until the past catches up with the present. She also mixed styles – using at times a “fairy tale”style and at other times a  “realistic ” style.  And as with time in the novel, the styles also catch up with each other.

Referring to style once more, Joyce praised the modified stream of consciousness style in  James Kelmans’s writing. She said she could not put down his latest book,  I think she was referring to Mo Said She was Quirky.

She said Kelman’s style was transparent and clear like water. James Joyce’s style, on the other hand, is like a rich and heavy liquid (she’d never been able to get past the first 50 pages of  Ulysses for that reason). Hemingway’s writing style meanwhile is simple, like chiseled ice and Faulkner’s style is rather like a long drunken but rich and sumptuous Southern drink.

It was great event. I feel very lucky to have been there and a big thanks again to Clicket for the ticket 🙂

This entry was posted in For everyone and tagged A Widow's Story, James Kelman, Joyce Carol Oates, Mo Said She was Quirky, Mud Woman, Princeton University, The Edinburgh Writer's Conference. Bookmark the permalink.

8 Responses to Joyce Carol Oates is a ledge!