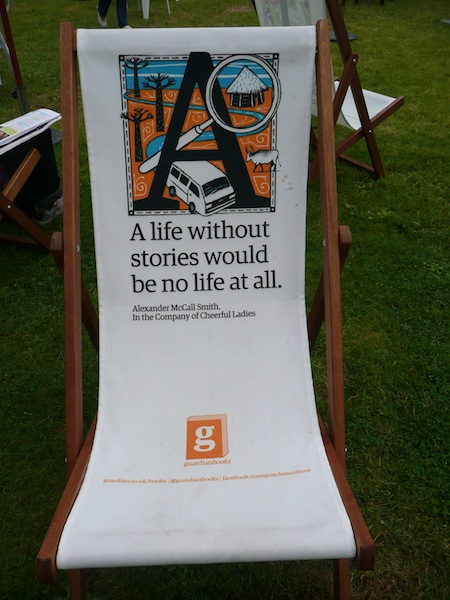 I was back at the Edinburgh International Book Festival (EIBF) again yesterday to listen to A.L. Kennedy talk about the pressures on writers to write.  Sadly, last Friday (hem!) was a tad late to arrange an interview with her, but the event was fascinating. It was made all the more special because  Sue MacGregor chaired it – and, yes, that is the Sue MacGregor from Radio 4 – those of you who are reading this from overseas, Sue used to be the presenter of BBCR4’s Woman’s Hour and the Today programme. This makes her an household name and as much an institution as Radio4. I mention Sue McGregor here even though it was AL Kennedy’s event because she was an excellent “chair” and that isn’t always the case ;o)

At this point I’d like to say sorry that I don’t have any pictures from inside the RBS main tent but cameras are not allowed. However, I can tell you that when I entered another packed house, the stage was lit up with a sort of violet purple backlight and what sounded like the music from 2001: A Space Odyssey seemed to be playing (but I think I  imagined that!)

I have only ever read AL Kennedy’s short stories, which I loved – she is a beautiful writer. I don’t know why I’ve never got round to reading her novels or any of her other stuff because she’s written heaps, including essays on writing, various other collections of short stories, six novels, and so much more to do with film and radio and on and on – oh, and she’s a stand-up comic! Her most recent book is called The Blue Book. The Evening Standard referred to it as a challenging read (uh ho, that sounds like the kiss of death for a book!) and in Sue MacGregor’s words, it has received “a great deal of attention”. Anyone got any thoughts about what all that means? Has anyone read Alison’s books? I’d love to hear from you! Anyway,  I have bought The Blue Book and will let you know what I think when I’ve read it! 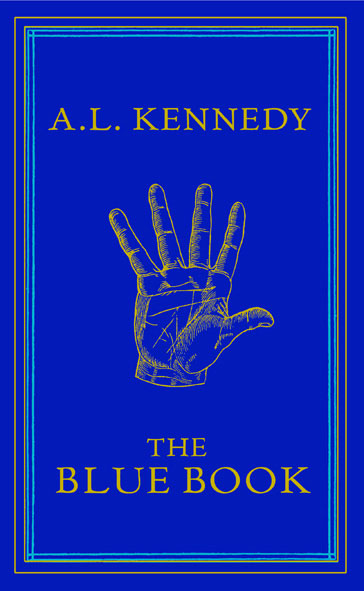 The book that came before The Blue Book is called Day. This is what Alison says about it on her website:

“I’m still not listing reviews for DAY – It won a Saltire Award, the Costa Prize, theEifel Literaturpreis, the Austrian State Prize For International Literature and helped me get a Lannan Award – so bits of it are probably quite good, although some people have trouble with the first 50 pages or so.” 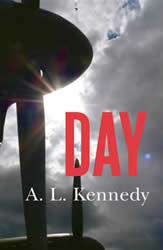 If Alison took the trouble to write the first fifty pages, I am going to take the trouble to read them  (yes, I also bought a copy of  Day)  – and I love a challenge, or even two ;o)  Okay to A.L. Kennedy herself.  She was GREAT! She read a very funny essay, taken a from a  series of essays which she wrote for Radio 3, about what she’d let herself in for in becoming a writer and the pressures that come with the job.  While a very different from Janice Galloway, she is in many ways very similar. They are both self-effacing, erudite people, who are not afraid to speak their mind and are extremely knowledgeable about the craft/art of writing, and are very generous about sharing that knowledge with others. Where to begin? Okay: Sue asked Alison around four or five questions to do with the pressures on the writer to write (the theme of the event!) which included the questions:

Where do you write and do you have to always write in the same place? Do you think  you have  a split personality as writer of many different forms of writing? What are you writing now? How Scottish can a Scottish writer feel when writing/living outside of Scotland? In 1962 Edinburgh hosted the World Writer’s Conference and Dame Doreen Rebecca West said at the conference “All Critics should be taken out and shot.”, do you believe that?

Here is the gist of what Alison said from her answers and from the reading of her essay on the theme  – but not necessarily in the order she said them!

I don’t think writers need to have a spilt personality to write in different forms. It is critics who have a problem with it, not writers. It is critics who divide writers into categories, not writers. It annoys me the way they do that. Writing is not complicated, it’s all about saying whatever it is you want to say  to someone when you are not with them. No, I wouldn’t take critics out and shoot them, because I’m against killing anyone, but it is interesting to note that before WW1 there were no critics, readers didn’t need to be told how to understand a story, stories, by their very nature, explain themselves.

I don’t have to write in the same place, it would be impossible for me to do that because for 70% of the time I am not in the same place. But I do have a writing routine to my day and I need peace to write, or at least a degree of peace. I write for long periods and write a lot at night, listening to music.  When I am in writing mood it can be unpleasant. I wouldn’t like to inflict myself on anyone when I’m like this.

When I am at the keyboard it is a place I feel safe. It’s where I address the constant monologue that is in my head and calm the “doom overload”. It is peaceful.

Why is it there a default? Why a “Scottish” writer? No one asks a writer from the South-East of England how they feel about being a  “South-East of England writer? And why  a “woman” writer ? I am a writer. The most important thing about being a writer is to be yourself and to write from one human being to another and to appreciate people. The Olympics are only just over and what amazing amount of people we have seen to appreciate, regardless of nationality. We’re all the same species. Not being British but being kind is hugely important. It’s what keeps us all together.

Sometimes I hate writing.  I used to write in tiny, tiny handwriting. I think I did that to hide the words just in case someone accidently saw them. When I eventually started writing on a computer I was horrified. On the screen ther words were so BIG and it was so clear that the words where shit! But I’ve learnt that feeling bad is normal when you are a writer. Writers mustn’t forget to also feel good. Because writing is also a beautiful thing to do and hugely satisfying.

It can be dangerous too, to be a writer. The appearance of power from controlling your own world can be toxic and we need to be aware of that.

Writers shouldn’t be scared of saying what it is you are trying to say and address the reader with enthusiasm and love and kindness. Address the reader like a friend. Without readers where would writers be? I believe if we write as well as we possibly can, the market will come.

I am working on a book about writing. It is due out next year and simply called ‘On Writing’.

Of course, Alison said more, a whole lot more, but that’s the gist of it. I also learnt that Alison was very ill last year,  she has had bone marrow problems which sounds very painful and scary. She is homeless (a long story!) and in the midst of moving to London to be closer her mother. She hates flying. She regularly goes to the US (by ship!) to spend time in a rich person’s sumptuous summer house in the middle of the countryside so she can write. It seems that there are many wealthy people in America who like to have “trophy authors” living for free in their second homes, so they can brag about them. Alison says it’s a bit like having “peacocks” in your garden, but authors aren’t as dumb (the house Alison goes to is very restful, apart from the woodpeckers, and invisible maids keep an eye on her daily needs!).

I think I’ll stop here for today. It was a treat to listen to Alison. I’m really looking forward to reading her books. Sorry I don’t have a pic of Alison from the festival, my bl••dy camera ran out of memory when I was with her. Grr!!!! One last word from Alison herself:

“Write what you know and if you don’t know about something, find out about it!” 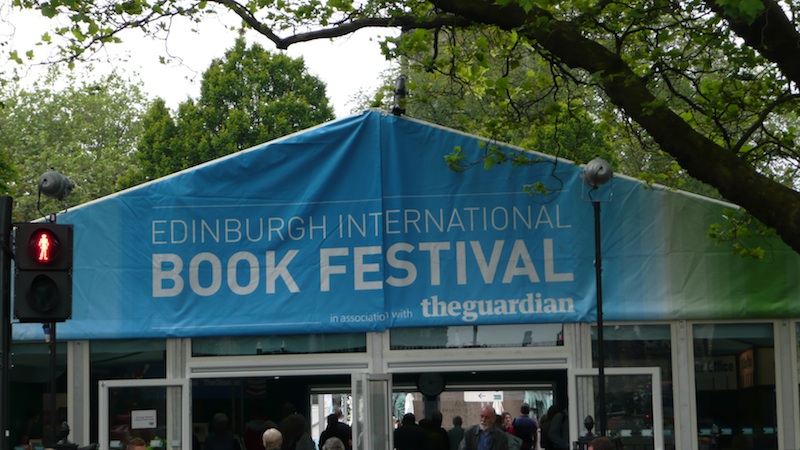 ps – a big shout to Clicket as always,  if you go to their blog you’ll find more stories about the events happening in all the Edinburgh festivals and you can even buy tickets for them!

pps -I’ve only been to two events at the EIBF so far and this is what I’ve brought home (not including the newspapers which have already been recycled). I can’t imagine what I’ll have collected by day 14 ;o) 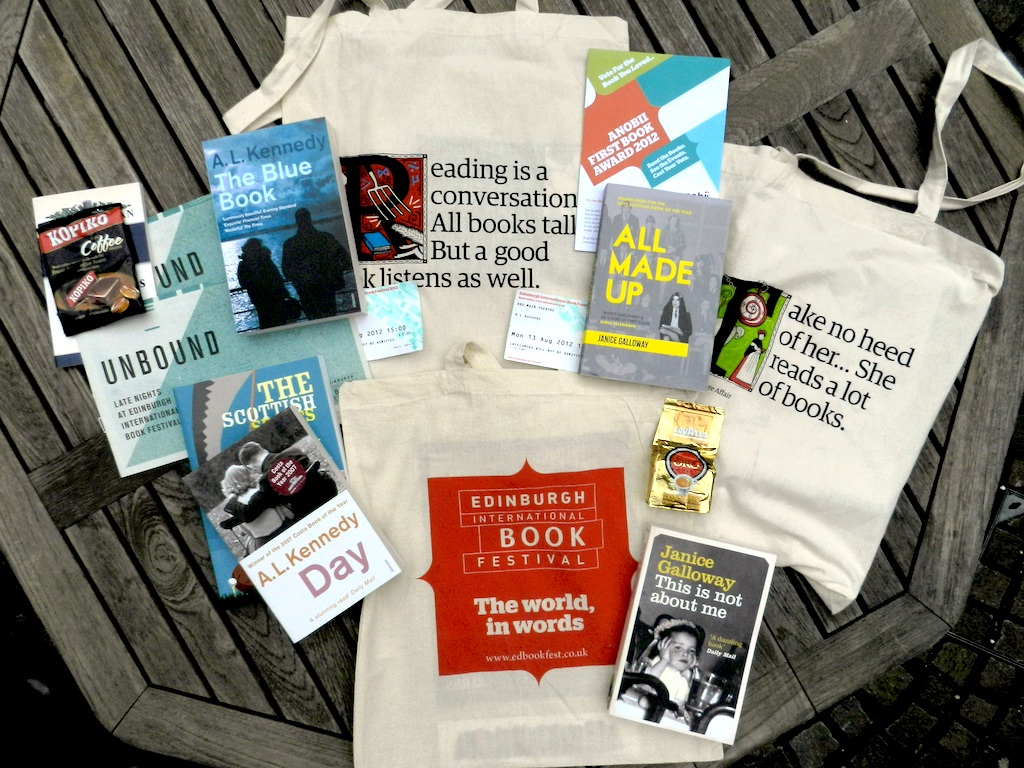 This entry was posted in For everyone, For readers, For writers and tagged A.L. Kennedy, BBCR4, Day, EIBF 2012, Radio 4, Sue MacGregor, The Blue Book. Bookmark the permalink.