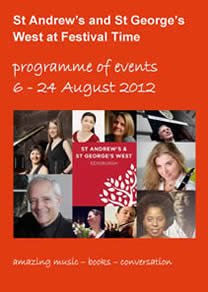 Every year  the people at St Andrew’s and St George’s West in Edinburgh host a wonderful programme of amazing music, books and conversation during the  Festival Time (6 – 24 August 2012)

As part of this  exciting programme  they are holding  a mini Fringe Book Festival on the 16th and 17th August. On the 17th I will be talking about The Blue Suitcase at the Shandwick Place Building (between  2 pm – 3.30pm).  There will be refreshments! Be lovely to see you there.

In case you don’t know,  The Blue Suitcase was inspired by letters and diaries discovered after my mother’s death. Here’s what’s been said about it:

“We think by now that there can be no more untold stories from the 1930s and the Second World War. Then a book like this comes along and we are once again astonished by the capacity of some humans to do unspeakably cruel things, and of others to survive them… It’s hard to read, but harder to stop.”

“The Blue Suitcase  is the fact/fiction diary of a young girl growing up in Nazi Germany. It is a window for the reader to gape through, mesmerised, amused, horrified and saddened as the unfolding scenes reveal what it was like to live in the country that instigated and carried out horrors on Jews, suspected communists, homosexuals, the old and mentally ill and perverted the bonds that hold families together, turning husband against wife, brother against sister. Each character is realised in full 3-D, each responding to Hitler’s regime, war and defeat in different ways, putting unbearable strain on the family. Ultimately, it is a story of survival, but the reader should be warned, the palette grows darker and darker, making it not one for the bedside table but always, unputdownable.”

“Though set between 1932 and 1947, as refugee fiction it remains highly relevant to the globalised, political and economic shock-waves driving migrations today.”

“The interest for me throughout is the way in which events are interpreted by different family members.”

“This superb book is based on the life of Marianne Wheelaghan’s mother, and she has seamlessly supplemented the facts with impeccable research. I found this story uncomfortable to read but couldn’t put it down. It’s a story that will stay with you for ever. This is a must read book for 2011.”

“It was with great pleasure that I read this World War II Nazi Germany story told through the eyes of a young German girl. The Blue Suitcase opens in 1932 Silesia, Germany. Antonia Nasiski is twelve years old. The political upheaval in her country slowly infiltrates her family, tearing them apart bit by bit as they each face horrific struggles.

It is a poignant coming-of-age story that tugs at the reader’s heartstrings. The easy, simplistic style transcends age restrictions and is appropriate for young adults as well as adults. What makes this novel so important is that it gives readers a point of view rarely shared – that of the suffering of the common German people.

The novel is a compelling read, unique, and one that will definitely shock. It is a portrayal of the resilience of the human spirit. An excellent depiction of a lesser know point of view.”

Do follow the link above if you’d like more details about any of the events during the festival, and/or want to book tickets.