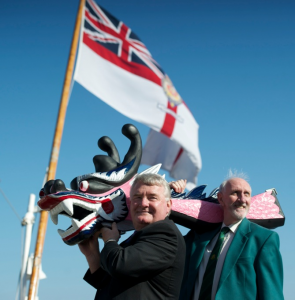 Despite living in Leith, here in Edinburgh, I somehow missed the Leith Dragon Boat Race last year! I will not do so this year. It’s a wonderful, fun event, which raises tens of thousands of pounds for charity and was started by the lovely people at The Leith Rotary Club (pictured here are 2012 club president, Ian Webster, and  president for 2011, Cron MacKay). Cron Mackay said the idea came when members attended a conference in York and went along to the city’s own Dragon Boat Race, which has been successfully running for eight years. 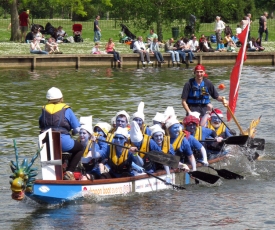 Smurfs in a dragonboat in York (Photo © Bill Tyne)

I know this because last night I was invited to give a talk to the Leith members of the Rotary Club about the inspiration behind the writing of my book The Blue Suitcase. I want to thank everyone there for making me feel so welcome. What a great audience and interesting bunch of people, who do such a lot of good for the community.

Follow the links if you want to know more about the Leith Rotary Club, or about taking The Dragon Boat Race Challenge, which this year is being organised in conjunction with  The Retail trust and Ocean Terminal and happening on the 23rd June at Leith Docks, parallel to Ocean Terminal shopping centre. The minimum age for participants is 16 and all team members must be able to swim.