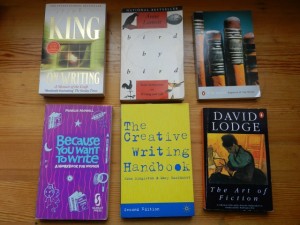 You’ll know, if you’ve been following this blog, how much I value good creative writing text books. The ones shown here are just six of the many I found helpful when I was starting out on the rocky road to becoming a writer. (I’m not going to mention the ones I bought which proved to be all bluster and no content.) I’ll share six more of my favourites next time.

If you have a favourite creative writing text book, why not write and tell me about it? You could even be a guest blogger!

Pearlie McNeill’s Because Your Want To Write

Sadly, this book seems to be sadly out of print. It was my first text book and a gift from a friend. If you are lucky enough to find a second hand copy somewhere, it’s worth buying. Here’s the blurb from the back.

You want to write, but how do you get started and keep going? What do you choose to write about? How do you find the right words, the language, the imagery? How do you work out plot, characterization, dialogue? How do you research the past for an historical novel or piece together the puzzle for a crime story? How do you approach publishers once it’s finished? And how have other women writers, past and present, tackled some of the issues you will face? Because You Want To Write is a creative writing book that combines practical, down-to-earth advice on the techniques of writing with an in-depth exploration of the history and background of individual genres, from autobiography to science fiction. Exercises and strategies to help you develop your writing skills are complemented by an analysis of different writing forms and how women writers have used them – from P. D. James and Delores Komo to Maya Angelou and Marge Piercy.

Here’s an excellent article about On Writing from The Observer newspaper, which reveals Stephen King’s six key rules for writing a best seller.

1. The basics: forget plot, but remember the importance of ‘situation’

I won’t try to convince you that I’ve never plotted any more than I’d try to convince you that I’ve never told a lie, but I do both as infrequently as possible. I distrust plot for two reasons: first, because our lives are largely plotless, even when you add in all our reasonable precautions and careful planning; and second, because I believe plotting and the spontaneity of real creation aren’t compatible.

A strong enough situation renders the whole question of plot moot. The most interesting situations can usually be expressed as a What-if question:

What if a young mother and her son became trapped in their stalled car by a rabid dog? (Cujo).

These were situations which occurred to me – while showering, while driving, while taking my daily walk – and which I eventually turned into books. In no case were they plotted, not even to the extent of a single note jotted on a single piece of scrap paper.

2. Similes and metaphors – the rights, the wrongs

When a simile or metaphor doesn’t work, the results are sometimes funny and sometimes embarrassing. Recently, I read this sentence in a forthcoming novel I prefer not to name: ‘He sat stolidly beside the corpse, waiting for the medical examiner as patiently as a man waiting for a turkey sandwich.’ If there is a clarifying connection here, I wasn’t able to make it.

My all-time favourite similes come from the hard-boiled-detective fiction of the 40s and 50s, and the literary descendants of the dime-dreadful writers. These favourites include ‘It was darker than a carload of assholes’ (George V Higgins) and ‘I lit a cigarette [that] tasted like a plumber’s handkerchief’ (Raymond Chandler).

It’s dialogue that gives your cast their voices, and is crucial in defining their characters – only what people do tells us more about what they’re like, and talk is sneaky: what people say often conveys their character to others in ways of which they – the speakers – are completely unaware.

Well-crafted dialogue will indicate if a character is smart or dumb, honest or dishonest, amusing or an old sobersides. Good dialogue, such as that written by George V Higgins, Peter Straub or Graham Greene, is a delight to read; bad dialogue is deadly.

4. Characters: nobody is the ‘bad-guy’

The job boils down to two things: paying attention to how the real people around you behave and then telling the truth about what you see. It’s also important to remember that no one is ‘the bad guy’ or ‘the best friend’ or ‘the whore with a heart of gold’ in real life; in real life we each of us regard ourselves as the main character, the protagonist, the big cheese; the camera is on us , baby. If you can bring this attitude into your fiction, you may not find it easier to create brilliant characters, but it will be harder for you to create the sort of one-dimensional dopes that populate so much pop fiction.

5. Pace: fast is not always best

Pace is the speed at which your narrative unfolds. There is a kind of unspoken (hence undefended and unexamined) belief in publishing circles that the most commercially successful stories and novels are fast-paced. Like so many unexamined beliefs in the publishing business, this idea is largely bullshit… which is why, when books like Umberto Eco’s The Name of the Rose suddenly break out of the pack and climb the bestseller lists, publishers and editors are astonished. I suspect that most of them ascribe these books’ unexpected success to unpredictable and deplorable lapses into good taste on the part of the reading public.

I believe each story should be allowed to unfold at its own pace, and that pace is not always double time. Nevertheless, you need to beware – if you slow the pace down too much, even the most patient reader is apt to grow restive.

6. Do the research, but don’t overdo it for the reader

You may be entranced with what you’re learning about flesh-eating bacteria, the sewer system of New York, or the IQ potential of Collie pups, but your readers are probably going to care a lot more about your characters and your story.

Exceptions to the rule? Sure, aren’t there always? There have been very successful writers – Arthur Hailey and James Michener are the first ones that come to my mind – whose novels rely heavily on fact and research. Other popular writers, such as Tom Clancy and Patricia Cornwell, are more story-oriented, but still deliver large dollops of factual information along with the melodrama. I sometimes think that these writers appeal to a large segment of the reading population who feel that fiction is somehow immoral, a low taste which can only be justified by saying, ‘Well, ahem, yes, I do read [fill in author’s name here], but only on airplanes and in hotel rooms that don’t have CNN; also, I learned a great deal about [fill in appropriate subject here].’

David Lodge’s The Art Of Fiction

Below is what David Evans said about The Art of Fiction in The Independent last year.

The articles collected in Vintage’s new edition of The Art of Fiction appeared in this newspaper from 1991-92.

In them, David Lodge deconstructs the novelist’s craft, taking in concepts such as stream of consciousness, intertextuality and the unreliable narrator, and illustrating each topic with an extract from a major work. Lodge’s selections are somewhat conservative, but his analyses are persuasive.

He eschews the esoteric tendency of literary theory and writes in an accessible mode, combining the insights of a seasoned scholar with the lapidary prose of a fine journalist. His approach has worn well: these essays are as fresh and as readable as ever.

I reviewed Bird by Bird in my blog earlier. Below is what I said.

In the introduction to Bird by Bird Anne says,

“One of the gifts of being a writer is that it gives you an excuse to do things, to go places and explore.”

Anne describes the agony and pleasure of being a writer-cum-explorer and all that she has learned along the way:

“Bird by Bird is every single thing I know about writing”.

Though first written in 1994 it is still fresh and relevant today and full of downright useful advice for the beginner, emerging and experienced writer. There are chapters on Getting Started, Short Assignments, Character, Dialogue, False Starts, Plot Treatments, Point of View, Jealousy (yes, Jealousy!), and much more. It is a well written and inspiring book. But it is also a memoir. And this works for me. As you read Bird by Bird you feel you are really getting to know Anne, her family and friends. She is an extremely honest and witty writer, who once had a drink problem and now has God. But you do not have to be an alcoholic (recovering or otherwise) or religious in any way shape or form to enjoy this book – neither are forced into the reader’s face.

If you feel compelled to write, Bird by Bird is for you.

“Writing has so much to give, so much to teach, so many surprises. The thing you forced yourself to do – the actual act of writing – turns out to be the best part. It’s like discovering that while you thought you needed the tea ceremony for the caffeine, what you really needed was the tea ceremony. The act of writing turns out to be its own reward.”

A reviewer on Amazon said:

“The book is about poetry and prose writing and is absolutely stuffed full of ideas to get you writing and then help you work at it. The writers used as examples are many, mainly contemporary and well chosen. There is also loads of original insight from them on the craft of writing.”

E.M. Forster’s Aspects of The Novel

This is taken from a website called enotes. It succinctly sums up what Aspects of the Novel is about.

The publication of a series of lectures on the English language novel, delivered by E. M. Forster at Trinity College, Cambridge, in 1927. Using examples of classic works by many of the world’s greatest writers, he discusses seven aspects he deems universal to the novel: story, characters, plot, fantasy, prophecy, pattern, and rhythm.

Forster dismisses the method of examining the novel as a historical development, in preference to an image of all novelists throughout history writing simultaneously, side by side. He first establishes that, if nothing else, a novel is a story that takes place over a period of time. He stresses the importance of character, maintaining that both ‘‘flat’’ and ‘‘round’’ characters may be included in the successful novel. He regards the necessity of plot, which creates the effect of suspense, as a problem by which character is frequently sacrificed in the service of providing an ending to the novel. Fantasy and prophecy, which provide a sense of the ‘‘universal,’’ or spiritual, Forster regards as central aspects of the great novel. Finally, he dismisses the value of ‘‘pattern,’’ by which a narrative may be structured, as another aspect that frequently sacrifices the vitality of character. Drawing on the metaphor of music, Forster concludes that rhythm, which he defines as ‘‘repetition plus variation,’’ allows for an aesthetically pleasing structure to emerge from the novel, while maintaining the integrity of character and the open-ended quality that gives novels a feeling of expansiveness.

A big thanks to The Independent, The Observer and Enotes (and an Amazon Reviewer) for the above.

This entry was posted in For writers and tagged Aspects of The Novel, Because You Want to Write, best seller, David Evans, David Lodge, EM Forster, John Singleton, Mary Luckhurst, On Writing, Pearlie McNeill, stephen king, The Art Of Fiction, The Creative Writing Handbook, The Independent, The Observer. Bookmark the permalink.